The Cairns International Airport is the main airport to-and-from Cairns with direct flights to 20 international and 44 domestic destinations, handling more than 5.2 million passengers each year. Located just 10minutes/7kms from the CBD with regular shuttle services, both Domestic and International terminals offer comfort and ease of travel when passing through. The direct international destinations include Japan, New Zealand, China, Singapore, Guam, Papua New Guinea and Hong Kong. With all this on offer, Cairns is accessible from any corner of the globe.

Each rider is responsible for researching and arranging to meet any international visa requirements for your travel. For the most up to date information please visit the website of the Australian Government Department of Immigration and Border Protection.

There are many transport options for getting to and from Cairns Airport to suit your needs and budget. The Sun Palm Transport Group operates the only accredited airport shuttle, directly servicing all accommodation providers in the city centre, Northern Beaches and Port Douglas. They also operate the Airport Connect service which links both Terminals to the Translink public transport network. Also available are car rentals, taxi services, as well as private transfers and limousines for those wanting to arrive in style! The city of Cairns is easy to access on bike, so you can always get the wheels spinning as soon as you hit the ground! You can also click here for helpful Maps or Special Assistance.

For more information on getting to Cairns, please visit the official Tropical North Queensland Website.

Cairns Regional Council provides over 450km of off-road paths (including shared paths suitable for walkers and cyclists) as well as many on-road bike lanes and wide shoulders suitable for cycling, so you can explore the unique region. Find maps of routes in the Cycling and Walking Guides available from Council's Customer Service Centres or visit the cycling page. 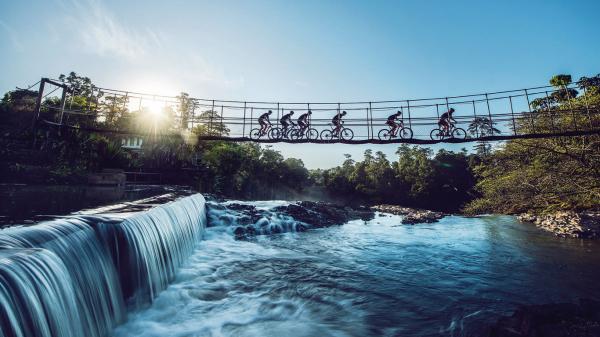 Queensland Rail operates regular passenger services between Brisbane and Cairns on The Sunlander and the high-speed Tilt Train. The Sunlander has been chosen as one of the World's Top 25 Rail Journeys by the Society of International Railway Travellers.

The public transport service, Sunbus, operates throughout the city, running from the northern beaches to the southern suburbs via the CBD.  For information about zones, fares, tickets, ticket types, ticket prices and concessions, visit www.sunbus.com.au or phone + 617 4057 7411.

Ports North is the closest port to the Great Barrier Reef and is located on Trinity Inlet. This small, multi-purpose regional port is becoming increasingly popular with tourist craft, private craft, and as an international cruise ship destination, as well as an R&R destination for visiting Naval ships.

The Cityport Development is a world-class waterfront facility that shall strengthen Cairns' reputation as the pre-eminent gateway to the Great Barrier Reef.  The first full stage of the project, Cityport North, was completed in 2003 and features the Reef Fleet Facilities, expansion of Cairns Marlin Marina, creation of Reef Fleet Plaza and boardwalks and boulevard linking the Esplanade to Trinity Inlet.  Work on Cityport South commenced in March 2009 and is still underway.