With the four day MTB stage race Reef to Reef making its debut in Tropical North Queensland, riders both past and present are heading to Cairns to be a part of history in the making, enjoy the stunning weather and rip it up on some of the best trails in Australia.

Among the hundreds of riders migrating north for the winter is Australian MTB legend John Waddell, keen for some genuine two wheel fun with his friends and determined to part of Australia’s newest mountain bike race.

When John was on his game there were very few riders on the planet who could match his dedication, hard work and ability. A star of the World Cup Down Hill scene, racing for the Intense Tyre/Santa Cruz team, he used his enormous skill to pay the bills and live out his MTB dream that began as a teenager in 1993 in the outskirts of Perth.

At the 2003 Mont Sainte Anne World Cup in Canada, John's life would veer in a direction that no one saw coming. Entering the infamous 65-foot double jump with too much speed, John got kicked mid-flight going over the front end, he ejected from the bike to try and get his feet down but he was unsuccessful.

Taken from the course unconscious after flying an estimated 60 feet through the air, John was rushed to a Quebec hospital with a severe brain trauma, spending 26 days in a coma before being eventually transported home to Perth by air ambulance.

John was lucky to be alive but calling on every ounce of his determination that took him to the top of the MTB world, he began the long and exhaustingly tough road of intense rehab, occupational and speech therapy to re-sign with his professional team less than two years after the accident. Since then John has continued to race and be involved in the sport he loves on many levels.

“The accident in Canada pretty much ended my professional career but I just trained myself into being an endurance athlete, competing in 12 and 24hr enduro cross country races. including the epic 2007 24hr World Championships. I have always been a fan of the multi day racing and because I am originally from Western Australia have a had a good affiliation with Cape to Cape.”

“I have a wife now and a family, I have different priorities these days, different responsibilities and commitments so things kind of change. Now it is all about having fun and riding good trails. I love mountain biking, I love trails and being a part of events like Port to Port, Reef to Reef and Cape to Cape is the best thing. I am not on top of my game now, but I still want to be a part of it.”

“I have been up to Cairns quite a few times and a lot of mountain biking friends in the region but I haven’t actually raced up there myself. I am really looking forward to Reef to Reef. It is going to be a wonderful opportunity to be up in Cairns riding great trails and that is what I am into. I am riding solo. I prefer to just do it myself and see how I go but I love being a part of it.”

“Later in the year I will head home and have another crack at Cape to Cape. It is on the cards. Western Australia is where I grew up and I have ridden Cape to Cape ten years in a row, every year since it started.” 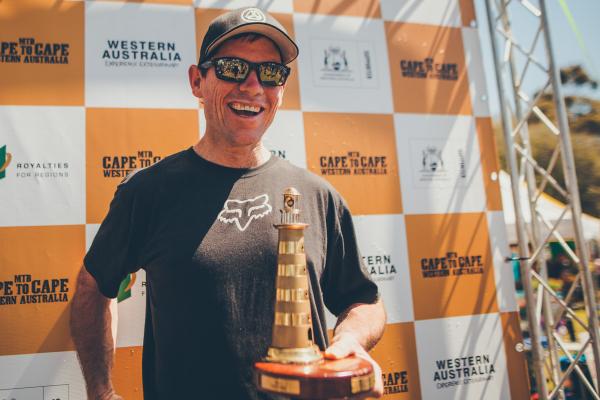 Now based on Melbourne’s Mornington Peninsula John still gets plenty of good riding but readily admitted to be looking forward to the winter break and the weather that riding and racing in Cairns has to offer.

“The riding is nice down on the Peninsula, with some good trails around Red Hill but I am enjoying the weather up here. I got off the plane and it is beautiful and warm. I am loving it and it is only getting better,” John said.